Gagliardi is a family business, started by Salvatore in the 1960’s, it was handed on to his son, Peter, and his son, who holds the COO position today.

One of the factors credited for the success and continuation of the business, is their absolute belief in quality, style and value. These values are what drives the whole Bortex family and its evident from the top floor to the shop floor.

The best food is made from the best ingredients – and not messed about with. While we can argue about which part of that country has the best food, Italy for sure is at the top of most people’s list. Italy also tops the list for fashion, the Lombardy region is rich with textile manufacturing and Gagliardi buys the majority of its accessories from here, fashioning designs to enhance the fabrics and show off subtle details.

The silk ties, bow ties, scarves and pocket squares we purchase from Bottinelli; another family business which has also had to be nimble and innovative to survive the variety of economic challenges Italy has gone through. Like our company, the grandson of the founder is key to the business, today holding the position of CEO and all of his children work in the business too. It is their challenge to take the company through the current crisis. 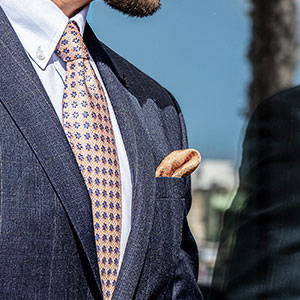 We design and they, thread by thread, manufacture our plain silks, fabulously intricate scarf designs, and some microfibre blends with modern digital print technologies. On entering the plant, the weaving machines mesmerise you and the floor to ceiling coloured cones of silks are for us, like being the proverbial ‘kid in a candy shop’.

The machinery may be modern, but the technique is not. Silk production in Como dates back to the early 16th century having been developed by a Renaissance Prince, Ludovico il Moro (the Dark), the Duke of Milan, and patron of Leonardo da Vinci, planted white mulberry trees from China around Lake Como. White mulberry leaves are the food of the silk moth, Bombyx Mori, its caterpillar being the silkworm.

Silk-weaving on an industrial scale began in the mid 18th century, particularly with the invention of the jacquard loom that could weave complex patterns powered first by water wheels and then steam power meaning Como with its ample mountain streams and rivers became a centre for the entire process, from silkworm breeding to weaving.

In the 1990s and 2000s, Como faced competition from emerging countries, particularly China; the production of silk in Como, however, continued to stand out above the rest in terms of quality, creativity, and a 400 year-old tradition of artisan craft and style that could not be imitated. Hermes to Armani as well as Gagliardi, continue to source their silk accessories in Como

So next time you are tying your tie, or arranging your pocket square, we’d like to thank you for being part of our extended family, and for helping companies like Gagliardi and Bottinelli to survive these world changing times.